It was last Friday (28th January) when we bought you the news of the Modern Express, a pure car and truck carrier (PCTC) that was listing heavily in the seas off of France in the Bay of Biscay.  The situation is worsening for the vessel.  The below has been taken directly from gcaptain.com.

Update (Sunday Jan. 31, 2016): Crews have started preparing for the Modern Express’s possible grounding if a tow line cannot be established in the next 24 hours, officials said Sunday. An update at 15:00 local time said the ship was located 50 nautical miles west of Arcachon, France and drifting southeast at a speed of just over 2 knots.

Weather conditions have further deteriorated since Saturday, with winds of 50 km/h and waves of 6 meters. Weather continues to prevent salvors from boarding the vessel to establish a tow line at time of update. According to Maritime Prefect, salvors will attempt to board the vessel again on Monday morning when the next favorable weather window is expected in a last ditch effort to save the ship before it runs aground.

Officials estimate that the ship may run aground sometime between Monday night and Tuesday night in the vicinity of Landes department in France.

The ship is carrying 300 tons of diesel, according to Maritime Prefect, but at this point all fuel remains secure. The shoreline near Landes is sandy, the agency said.

Maritime Prefect reported at 11:00 Sunday that the ship was located at 59 nautical miles west Arcachon and winds were gusting to 80 km/h.

For reference, on Saturday at 17:30 local time the vessel was approximately 108 nautical miles west of Gironde and drifting up to 3 knots.

On Friday, a four-man team was able to board the listing vessel by helicopter, but they were unable to establish a towing line before disembarking by nightfall. One of the salvors suffered minor injuries in the operation and has been evacuated from the area.

As of Saturday, weather on the scene deteriorated with winds of Force 6 gusting to 70 km/h and waves of 4 to 6 meters, making another attempt to board the vessel very risky.

According to Maritime Prefect Atlantic, a team was once again hoisted onto the vessel for a short time to make initial preparations a tow once a weather window presents itself. Another attempt to tow the vessel will not be made until Sunday morning at the earliest.

The location of the Modern Express as of 17:30 local time was approximately 108 nautical miles west of Gironde, France, drifting east towards land at 2 to 3 knots.

On scene are two tugs contracted by the ship owner, the French emergency tug Abeille Bourbon, the French Navy frigate Primauguet with a Lynx helicopter, and the AHTS Argonaute. 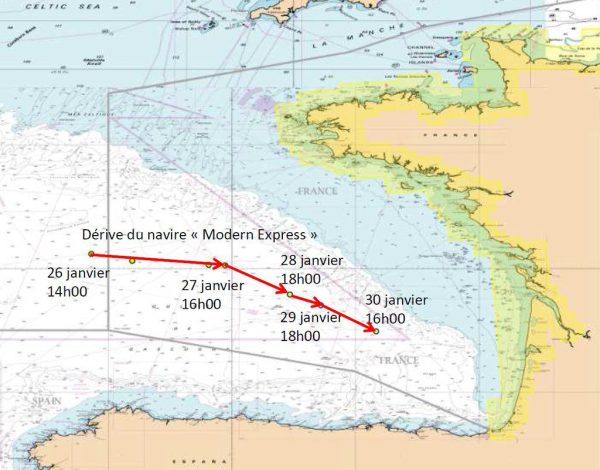 The Panamanian-flagged pure car and truck carrier (PCTC) Modern Express developed a severe list on Tuesday while underway in the Bay of Biscay on a voyage from Gabon, Africa to the port of Le Havre, France.

All 22 crew members were evacuated by Spanish search and rescue helicopters. The ship entered French waters a short time after the rescue and has since been drifting east at a speed of 1 to 3 knots.

It is carrying 3,600 tons of timber and construction equipment.

Some amazing footage has been taken off the heavily listing vessel. This footage is courtesy of The Telegraph: